The Punk & Roll Band from Sestao

Los Whitos are a punk & roll band from Sestao, Vizcaya (Spain) who have been on the scene for 10 years. During this time they have supported well-known figures from the Spanish rock scene, such as "Rosendo" and "Barón Rojo".

We are a hard-hitting band with good lyrics and a message to boot-all delivered with a sense of humors.

Our set is usually over two hours, often joined by friends and musicians from others bands. 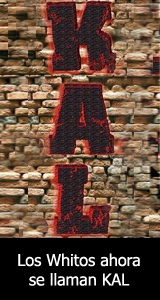